JOYELY and the Chair of Joy™ Officially Expand the Movement of Joy in Sarasota, Florida 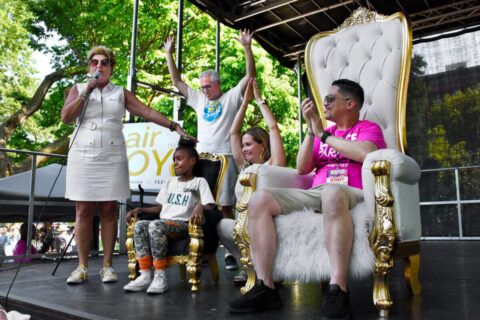 Swing, Afro-Caribbean, traditional Chinese, hip-hop, mambo, salsa, ballet — these are just a few of the 100 dance styles represented in NYC’s 16th Annual Dance Parade, an event that could very well be on its way to legendary status.

Over 10,000 dancers made their way on May 21 from Broadway and 20th to Tompkins Square Park in 90 degree heat, with many of them proceeding to one of the stages to perform for a packed park. Not all had their feet on the ground — some roamed on stilts, others on roller skates and still some atop a float, but they were all still dancing.

It was a day of unicorns and party buses, kids and senior citizens, tango and funk. Grandstand Lead Dana Humphrey commented that “the Dance Parade is energized with a lot of strong, grounded love and care, so everyone can feel free to let loose and dance.”

“It’s an intense, spirited and marvelous event. Joy and sunshine and dancing create a magical effect,” she added.

The “Most Energetic” award, if it existed, would have gone to the CarNYval, an Afro-Caribbean troupe.

Casey Steffens, with camera, volunteered her time and skill to document the dancers, including the Herencia Flamenco Group

Striking poses…..Daniela on the pole and Pixel the Drag Jester on the Aerial Silk. Pole and Silk courtesy of the House of Yes

Jacqueline Rutigliano of the Hoop Troupe demonstrating a favorite trick in the park. “All the photographers love that one!” she said

The Grand Marshalls after being recognized on stage, L-R: Heidi Latsky, Rich Medina and Eduardo Vilaro

Sheryl Lynn (left) , founder of JOYELY, invited 8 year old Hailey to share a moment of joy from her life while sitting in the ‘Chair of Joy™’. Her answer was ” being in the Dance Parade.”

When the dancers found themselves at Tompkins Square Park, the end of the route, they just kept dancing, onstage and off.

In the back of the park, additional stages included the Family Stage, a Teaching Stage and a DJ dance party adjacent to the Aerial Stage where performers took turns on a pole and aerial silks provided by the House of Yes. All through the park dance groups, community organizations and sponsors had booths set up to dispense info and the occasional swag, including the extremely popular electric fans given away by Spectrum.

After parading through town , the Freaky Deaky Krewe set up at the north end of the park for a DJ led dance party

Dancers filled the streets with energy and color

It wasn’t unusual to hear people saying, in one way or another, that this was their favorite day of the year.

Jake Ohring, a volunteer with the onsite medic team, exclaimed that, “This was one of the greatest days that I’ve had in New York City. It’s a celebration of everything that makes New York amazing.”